On an 11 hour direct flight from San Francisco to Tokyo, I find myself with the kind of time where I can catch up on movies that I wouldn't even consider watching on a lazy Sunday. There's something liberating about being crammed in a big flying metal tube for a long period of time. It's like the time is already forfeit so I don't mind if it's wasted on a potentially bad movie.

But I was pleasantly stunned to find an under appreciated gem in my selection, and unplanned by me, I watched it in the perfect setting. 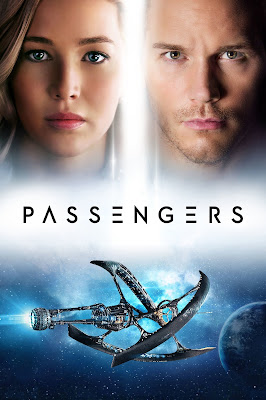 Passengers (2016) is a small ensemble sci fi romance drama starring Jennifer Lawrence and Chris Pratt that passed through the theaters unnoticed. Two space faring passengers find themselves woken up way too early on a ship traversing an expanse that takes 100 years to cross, dooming both of them to live out their remaining years as castaways on a cruise ship. Pratt's character is woken because of misfortune; Lawrence's character is woken because of desperation. They eventually fall in love, but in a way that feels earned and meaningful.

I had very low expectations for this movie (it has a 30% on rotten tomatoes) and only had it on my list because I'm a sucker for space travel themes, high production value sci fi design, and Thomas Newman on score (there are some really sweet moments that remind me of Wall*e because of Newman's sound). But in the last act of the film, my jaw was dropping as much from the tense climax and heartfelt ending as from the complete under appreciation for this film. I cared for these characters. I felt for their decisions, their mistakes and their emotions. Their motivation, although simple, was believable and relatable in an unimaginable situation.

These two passengers start out feeling like it was a life sentence to live out a luxurious yet isolated existence traveling across the stars without others around them to provide purpose or validation. But by the end, they find all they needed was each other. Romance wise, it's a touching sentiment, but it got me thinking how this space ship, with around 5000 migrating passengers was already on a mission of isolation from an overpopulated Earth. Everyone on that ship felt like 5000 was enough other people to bring them meaning when they reached their final destination.

It's a very believable premise and it got me thinking how we all probably have a number in our mind of how big our community needs to be for us to feel fulfilled. In a time when technology allows us to create connections well beyond the Dunbar Number, I worry that we all think our numbers are bigger than they need to be, which causes inflation to the point where each relationship is so devalued that even the sum of many leaves us wanting. I see this story as a suggestion that the lower our number is, the more satisfied and connected we may feel with the community we share. Having a number as low as 2 may be a bit overly romantic, but I do feel like a lower number is something worth aspiring towards.

If the inevitable evolution of virtual reality is to create communities that mirror social value in real life, I wonder if it will be a technology that further dilutes our feeling of belonging or if it provides us a way to create communities sized to fit each one of us. As some one who is invested in seeing VR be a medium that makes us better people, I push and hope for the latter.