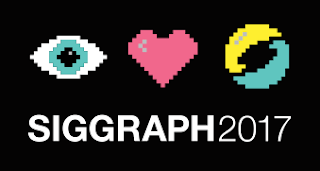 I came away from Siggraph this year inspired, and surprised! I haven't felt this way about Siggraph in a while.

I remember my first Siggraph in 2004 where I was giddy and overwhelmed by the amazing things happening in computer graphics. In fact, I think that first Siggraph was the reason I decided to make CG my life's work. Year after year, I thoroughly enjoyed watching the improvements in simulation, shading & lighting, geometry manipulation, and rendering.

But it was around 2011 when I began feeling like the paper titles were getting longer and more obscure to compensate for the fact that the contributions felt like they were making smaller and smaller steps forward. The production talks continued to be somewhat interesting, but they became more about efficient pipelines and entertaining anecdotes about adventures in technical creation. It felt like innovation in the field was plateauing.

It was also around this time where I had this sinking feeling that computer animation and visual effects had become a mature industry, and I found myself sneaking away to all of the realtime sessions. That feeling eventually grew into a decision to leave software rendering and go into realtime VR.

And I wasn't the only one, I felt like the "Advanced in Realtime Rendering" course kept getting bigger and bigger as attendance in path tracing and PBR rendering talks shrank. Worse than shifting attendance, many were opting out of the conference altogether as overall registration declined since its peak in the 2000s. More of a concern for the organizers, companies were deciding not to exhibit, and exhibitor fees are a serious revenue stream for Siggraph's governing body.

Since I've moved over to VR, I have also started attending GDC, where I found myself reinvigorated by all of the interesting problems still ahead in the area of realtime. In contrast, Siggraph just wasn't exciting any more.

But this year, it felt different. Despite the fact that this was the smallest exhibition I've seen to date, emerging venues like the VR Village and the new VR Theater were signs that Siggraph is pivoting in a new and promising direction. Furthermore, research and talk topics are swinging towards VR, AR and machine learning techniques, areas that have a lot of undiscovered promise.

I have a theory, most likely a well studied theory in Economics, that there is a cycle in technology development between spurts of innovation as new promising areas of research are uncovered and plateaus of maturity, and this cycle drives a lagging curve of commercialization.

My idea is that as new areas of innovation show promise and gain momentum, ways of turning that rapid progress into thriving business soon follows. But as the innovation curve starts to plateau, the commercialized space gets over saturated and goes through a correction. I think what's happened over the last 7 years with the decline of exhibitors at Siggraph is a sign of that correction.

But what's so exciting about what I saw at this past Siggraph is that although the exhibitor attendance was its lowest in the past 12 years, individual attendance feels like it's creeping up and the areas of research felt fresher than ever.

I think Siggraph 2017 may mark a turning point, showing signs that we are in the first few years of an innovation spurt, and I think it will take a few more years before we see the market respond.

There were 4 particular moments that stood out for me at the conference.