VR is not for story telling, it's for story making

3 years ago, I thought VR was the next great medium for story telling. My team and I worked hard to see if we were onto something. We did some outstanding work, work I'm proud of. But since my team was disbanded this past May, I've had a moment to pause and reflect on the first steps we took. Looking back, I now think I was wrong.

VR is not for story telling, it's for story making.

We all love being told a great story, a hero's journey we can relate to, and perhaps apply something to be learned in our own lives. But the stories we are told are never our own. Whether we are told a story through a book, on stage, on screen, or in person, the order of events has already been decided and we the audience can have no influence over it.

Film and television have become the most popular story telling media because the tools that define them, composition and editing, can so easily convey a complex order of events in an accessible and readable way, especially considered how well the audience understands those media after having grown up with them.

To think that VR, which takes away framing as a tool, could be a superior form of linear narration was naive. I don't kick myself for that naivety, because it wasn't obvious until we tried. At the beginning, any new medium is always underutilized or misused. Just like the first film makers thought the best use of a camera was to put it in front of a stage play, we early VR pioneers thought we would take away the 4th wall but could still tell the same kind of stories. It takes lots of trial and error before a medium has its first Citizen Kane.

So over the past few months, I've taken a step back and thought about what VR is truly good at, the feeling of being there, and I've realized that instead of trying to tell stories, we need to have our visitors make their own.

The problem is that if you create a world and then ask your visitors to craft their own stories within that world, that is a blank canvas that's way too intimidating and inevitably unfulfilling. We need to find a way to define a road worth traveling that can lead to moments of awe, discovery and excitement but give the visitor enough agency and compulsion to walk the road for themselves.

I believe we can do this in 2 ways.

First, the compelling stories we make in our own lives are always with others and most often with our friends. VR must be a social experience.

Second, give those group of friends a shared goal and a suggestion of how to get there. A quest is the right kind of story hook and its in the journey that you create memories together. If we can capture that excitement that comes from bonding together and accomplishing something as a team, I think we'd be getting closer to what will make VR work. In many ways, this is what multiplayer games try to do, but how my approach may differ is that I think the design of the experience should focus on the journey's arc and less on the feeling of accomplishment that comes at the end.

I am excited to be working in the social VR space and to be thinking up new ways of how friends can come together to go on virtual adventures. 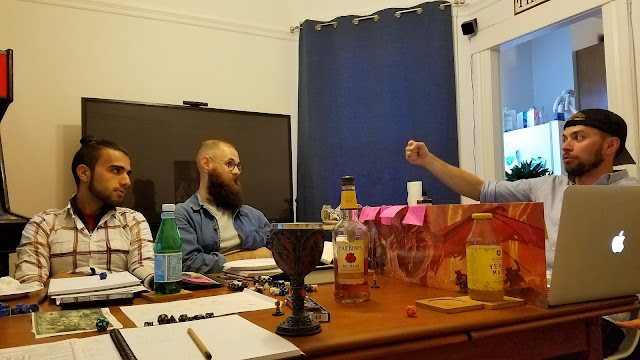